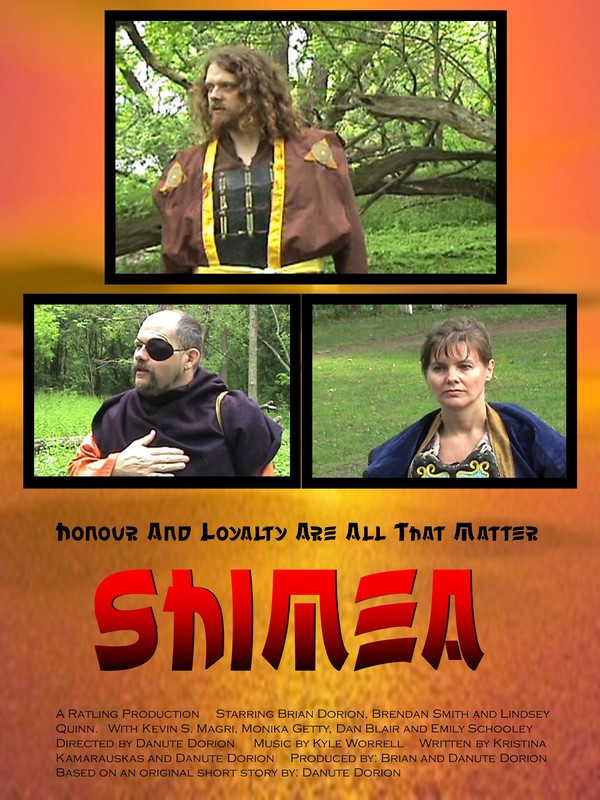 ​
SHIMEA is a story blending medieval fantasy with a little of that Chinese Wuxia vibe. Set in an imaginary time and place it tells the story of a world beset by Shohan, an ancient enemy bent on domination. Having been defeated two hundred years earlier, Shohan returns to play a more subtle and deceitful game of conquest. Standing against him are Oranzu, a wise master of the Wuxia, and Shimea, a lost son on the brink of discovering the truth of his heritage. Secret identities, betrayals and revelations combine in a story about love and loss, faith and family.

Made under Ratling Productions.  The approximate budget for this film was $500.00, which went primarily into location costs and craft services.

Before filming started we had lined up several locations for interior shots. However, because we were essentially a $0 budget film we lost several locations to paying gigs. And at least one was yanked from under us for no apparent reason other than a change of heart.  As the cast was made up of actors with regular day jobs, we were on a very tight schedule and found ourselves scrambling for other locations. Which meant rooms draped in fabric and a former factory space with extremely creaking floors; a real nightmare for sound. We also moved several scenes originally scheduled as indoor shoots to the outdoor shoots.

​Costuming & props also were something we worked hard on. We felt it important to have some differences between the two cultures in the film. Most of the costumes, props and weapons ended up being raided from the closets of myself and friends who belong to a medieval group. Key pieces were constructed to bring the look together. In the end we had a look that we felt worked very well. We were lucky to get FBN Multimedia to come on board to do the few special CGI effects we had, and Blackthorn Productions who did a wonderful job of staging the fight scenes between the main characters. Musician Kyle Worrall came on board long distance from Winnipeg and really listened to what we needed and delivered in spades an incredible sound track. It would have been much harder without their help.  Crowd scenes were the final challenge. We had a lot of people commit to showing up and we were lucky if we had half the number actually put in an appearance. Those few who did show up became a solid core of support throughout production for which we were extremely lucky and grateful for. With fewer bodies, however, we needed to do some clever editing to fill in the gaps; such as a voiced over battle and roiling smoke clouds suggesting fire instead of a battle. Overall, we started filming in February 2009 and wrapped the final shoot in September 2009. I spent close to 200 hours working on editing the final project. We did a video release to the cast and crew in October 2009.

It was during the filming of Shimea that we became aware of how important sound recording can be. The sensitive mike on the camera picked up extreme amounts of ambient noise which created a lot of inconsistency in sound quality that needed to be corrected in post. With that lesson behind us, we are pleased to have recently picked up an External Shotgun Microphone that will make sound on future projects that much more professional.