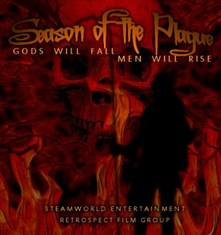 Set in a different world, a different time. When the Gods go mad, humanity faces its doom and it's up to a small band of Champions to find a way save their world from the darkness.

Season of the Plague is a Web Mini-Series with the story coming to its full conclusion. It is heavy on matte work with some Special Effects and rich in Character. Filming took place over the Spring and Summer of 2011, primarily out-of-doors, rain or shine.
It has been a long journey.  We shot the project over 6 months in 2011.  A number of health issues and personality conflicts stopped production in late September with the view of picking things up again in the following spring in 2012. The long winter hiatus meant that some of the cast became involved in other projects and when spring rolled around it meant that they were no longer available.  The production team thought long and hard before pulling the plug on completing the series. There were only three of the 12 episodes left to film and we had already filmed a few bits on Episode 10.  These were left on the cutting room floor as the were out of sequence and we were not able to incorporate them smoothly into Episode 9.

But we wanted to go forward and complete what we had done.  Halfway through Episode 4, and midway through 2013, we lost our editor.  Who was also our VFX compositor.  The project got put on the back burner. Last year we decided to finish the project as far as we could. Below are the nine completed episodes.  And below them the script of the last three episodes so those following the story will know how it ends.

Independent no-budget film making has its challenges.  We certainly discovered that on this project.  But we are proud of what we accomplished and we hope that you enjoy the journey.
Since the Facebook page is shutting down, thought we would transfer the Behind The Scenes pics here from that page.
AD STILLS FROM THE SERIES:
We approached this project a little backwards. While we knew the whole story arc and some of the basic characters, we cast the film first and then fleshed out the script based on the  talents, skills and ideas of those coming on board. As a low budget production it is sometimes hard to find the cast and crew for a finished script. With this approach, we were hoping to resolve this dilemna. It was an experiment and an exciting new path. Parts of the journey went very smoothly.  parts of it were rocky.

WATCH AN OVERVIEW FEATURE ON THE GODS HERE: https://www.youtube.com/watch?v=zl-fzeHGL7o
WATCH TWO FEATURETTES ON THE PROCESS OF GREEN SCREEN TO COMPOSITE FINAL:
https://vimeo.com/103586994

WATCH EPISODE 3 HERE: The Champions gather at the Temple of Shea in the devasted city of Chan'Fe.
https://www.youtube.com/watch?v=zqtpYM_v70E